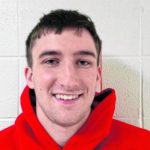 Jackson Paradise was crowned homecoming king last Friday during the homecoming ceremonies here at Hauser, but that was just the start of his night.  Jackson then followed his crowning by scoring a career high (and third most ever by a Hauser player) 41 points, including seven 3 point baskets!  He led the Jets to a

No Events This Week

Events are added by athletic staff.
View All Events